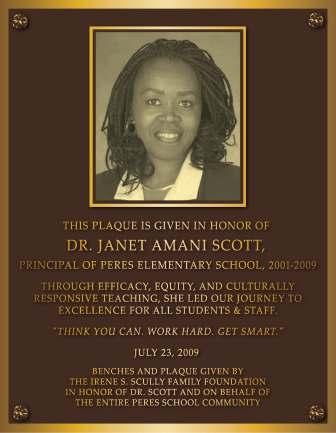 Dr. Janet Scott may be new to her role as Director of School and District Initiatives, but she is already a familiar face at Efficacy.  For 17 years Janet has been using Efficacy to great effect - first as a classroom teacher, and more recently as principal of Peres Elementary in Richmond, California.  At Peres Janet led her staff to turnaround their performance from failing (they were in "Program Improvement" when she took over) to high-performing (they nearly doubled their Academic Performance Index, and received "Honorable Mention" among distinguished schools in the state).

In recognition of her outstanding work, this May Janet was named by her district as the Elementary Administrator of the Year.  She was also the recipient of the prestigious statewide "Valuing Diversity Award," which she will accept in Sacramento later this month.  "I feel humbled and extremely honored to be recognized for doing what I feel to be the right thing to do," Janet says.

As Director of School and District Initiatives Janet will be drawing upon her own experiences to coach administrators in the implementation of Efficacy at their schools. "Efficacy was the overarching philosophy," she explains when asked how Efficacy fit into the turnaround plan of her school. "It was a way to release the potential of teachers and students, and change the way things were."

She goes on to explain that every strategy she employed needed to be in line with the Efficacy mindset - the belief that virtually all children can reach proficiency if the adults effectively organize their practices to support them.  Janet knew that any strategy not in line with this belief would essentially take them off track, even if it was widely regarded as a best practice.  The same went for her leaders and coaches.

Janet also used the Efficacy mindset to intervene and redirect teachers' practices.  Janet describes that her teachers experienced greater autonomy as a result, and were mobilized to work in teacher teams to disseminate data and share strategies.  Because of their shared focus on the mission, Janet and her school leaders found they had more time to offer instructional support to teachers.

What Janet built at her school was a sustainable model where leaders and coaches could carry out the mission, even in her absence (her former Vice Principal, Jean Hansen, has stepped into the role of Principal).  And with Efficacy, Janet will be extending her reach to educators beyond Peres.

Focusing on underperforming schools, Janet will support administrators to replicate what she did at Peres.  "I will be helping them set the foundation to use the Efficacy lens to impact and inform their decisions " she says.  She is also developing execution supports to bolster their efforts.

We at the Institute congratulate Janet on her outstanding work, her Administrator of the Year and Valuing Diversity awards, and welcome her aboard!

You can visit our Strategy page to watch Janet and members of her staff at Peres talk about their experience using Efficacy to turnaround their school.

There is a very high-stakes assessment, composed of a single question, which sooner or later confronts every American

Dr. Jeff Howard's primer offers a crash course in Attribution Theory: The study of how people explain their failures and successes.

What's the Boston Campaign for Proficiency (BCP) all about? Campaign Coordinator, Fran Smith, has a bold answer to that question.